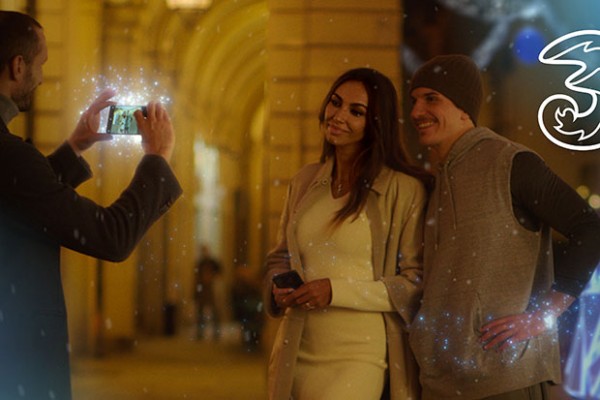 A frame of the spot 3

At the center of the communication, the "3 Xmas Edition" initiative, which allows to have the gift as a present fitness bracelet ‘Mi Smart Band 4’ buying a Xiaomi smartphone with 3: a proposal that intends to strengthen the brand's positioning as a leader in technological choices and as a reference point for innovative solutions, in which the quality of services is combined with the best devices.

In this spot, Giorgio and Madalina walk in the city center and, with their Xiaomi smartphone, take pictures of the streets decorated with Christmas lights and the people they meet. With each click, as if by magic, a luminous trail makes the new ‘Mi Smart Band 4’ appear on the wrist of passers-by. The song that serves as the soundtrack to the commercial is "bella vita" by Arianna with the participation of Shaggy.

The new spot 3 is scheduled, in the 30 and 15 second formats, on the major national TV networks and a video campaign on the web is also planned. The Wind Tre media center in Italy is Dentsu Aegis Network, recently confirmed after a race.

airing the Christmas spot with the couple Chiellini-Ghenea

Published: November 25, 2019 Category: News
Previous: 3 – at the start of the '3 XMas Edition' with the Mi Smart Band 4 as a gift
Next: Mădălina Ghenea, seductive appearance at the Vanity Fair's Personality Of The Year Gala | Romanian, Celebrities
%d bloggers like this: