The mandate to execute the punishment was issued Thursday, February 7, but police officers from the Tracking Service of the Capital Police did not find him at his home address. Under these circumstances, a European arrest warrant was issued on behalf of the businessman in order to execute the punishment received, and his photograph and data came to the "Most Wanted" section. More precisely, he joined other people prosecuted for various criminal offenses on the site of the Romanian General Police Inspectorate.

"It is avoiding the implementation of the mandate to execute the prison sentence," the IGPR announcement says. According to judicial sources, Dragoş Săvulescu would be in Monte Carlo. 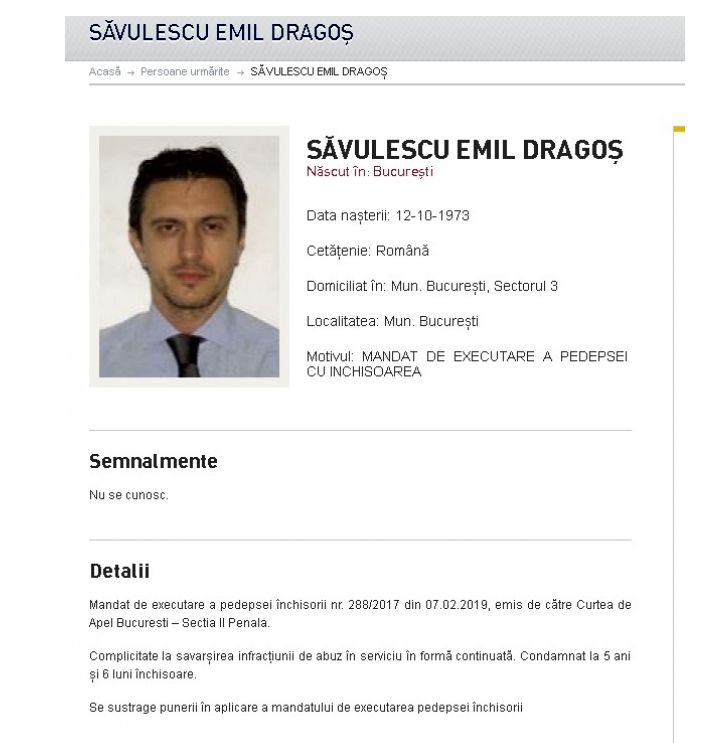 On Friday, representatives of the Constanţa Police have sent out activities to notify the court for issuing a European arrest warrant and an international warrant for former mayor Radu Mazăre after his final conviction for 9 years of imprisonment, , according to the latest information, it is in Madagascar.

Nicuşor Constantinescu, former president of Constanţa County Council, is already incarcerated at Poarta Albă penitentiary where he is serving a five-year sentence for abuse of office.

Read also: 48 Hours That Amazed the World! Summary of the incredible case of the impostor Matthew Mode, who was arrested the day after his release, while his story reached all over the world

Businessman Dragoş Savulescu, traveled in Europe. A warrant of arrest was issued

Published: February 9, 2019 Category: News
Previous: the 5 secrets of the presenter Virginia Raffaele
Next: The one from which the City Hall bought the Verdi Park, former Dinamo owner and ex-girlfriend of Maddalena Ghenea
%d bloggers like this: