The model and actress Mădălina Ghenea participated, on Wednesday, in the premiere of Paolo Sorrentino’s latest film, “Youth”, of which she is a part, according to the Facebook page of the event.

On the other hand, The Hollywood Reporter wrote on Tuesday that Mădălina Ghenea drew attention to the Cannes International Film Festival with her poster, which appears on the poster of the feature film in the official competition of the film event.

Ghenea told the prestigious publication that she has three other projects on her agenda – two main roles and a secondary one. She will be filming for the three films until the end of October. Thus, Mădălina Ghenea will play, among others, the main role in “Condemned to Love”, the directorial debut of the Oscar-winning screenwriter Barry Morrow, a film that she describes as “a magical love story”. 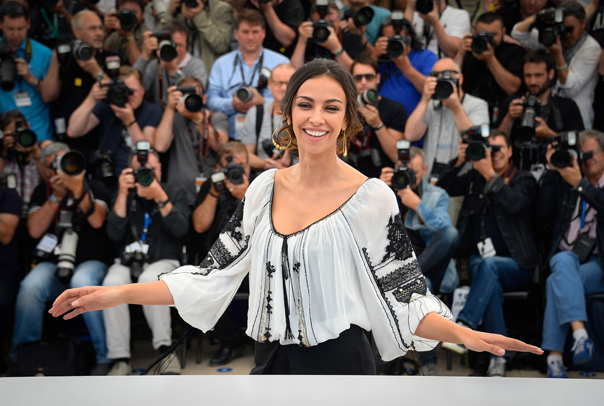 At the same time, Ghenea told The Hollywood Reporter that she is not bothered by the attention paid to the “Youth” movie poster. “I don’t think he’s vulgar, I think he’s beautiful,” she said, adding that she hopes her acting performance will be the center of attention in the future.

“I have three projects planned. So, I think I’m doing a good job at auditions. (…) And, when I go to them, I don’t show them the back,” Ghenea added.

Madalina Ghenea filmed with the legendary British actor Michael Caine for the film “La giovinezza / Youth”, directed by Paolo Sorrentino. The British tabloid Daily Mail presented, in July 2014, photos from the set of the film, in which Mădălina Ghenea appears parading as a Miss Universe on a podium, while being admired by the actor Michael Caine.

Madalina Ghenea, 26, and Michael Caine, 82, are in the cast of “La giovinezza,” along with other well-known actors such as Rachel Weisz, Harvey Keitel, Jane Fonda and Paul Dano.

The film tells the story of two old friends – a conductor and composer, on the one hand, and a director, on the other – who think about how much time they have left to live while spending their holidays in the Mountains. Alps. The film follows the two’s efforts to return to their careers, as well as the relationships they have with their children, but also how they interact with the other guests of the hotel where they are staying.

“La giovinezza” is the second film in which Italian director Paolo Sorrentino works with English actors, after “Rocker Hit: Eyes for the Eyes / This Must Be the Place”, with Sean Penn.

According to information published on imdb.com, the film is set to be released on May 21 in Italy. Filming took place in Italy, Switzerland and the United Kingdom.

Madalina Ghenea was born in 1987, in Slatina. Her fashion career began when she was 15 years old. In 2010, she participated in the “Ballando con le stele” contest, broadcast by the Italian television Rai Uno. Madalina Ghenea made her acting debut in 2011, in the Italian comedy “I Soliti Idioti”, directed by Enrico Lando. She also starred in the film “Dom Hemingway”, directed by Richard Shepard, in which she appears alongside Jude Law. On the other hand, Mădălina Ghenea received the Sorriso diverso Roma 2012 award, for the role played in the film “Razzabastarda” by Alessandro Gassman, the distinction being awarded by a cultural association in the context of the 2012 edition of the Rome International Film Festival.

Madalina Ghenea was named one of the most wanted women of 2012 in a top made by AskMen.com and, over time, she had relationships with famous actors such as Leonardo DiCaprio, Gerard Butler and Michael Fassbender, according to information in the international press.

The 68th edition of the Cannes Film Festival began on May 13 and will end on Sunday. The official competition jury is chaired by American filmmakers Joel and Ethan Coen.

Cannes 2015: Mădălina Ghenea, in ie, with Jane Fonda, at the premiere of the film “La giovinezza”

Published: May 20, 2015 Category: News
Previous: Madalina Ghenea, private life: the dream in the drawer
Next: Madalina Ghenea: "I am not so beautiful. If you see well I have imperfections"
%d bloggers like this: