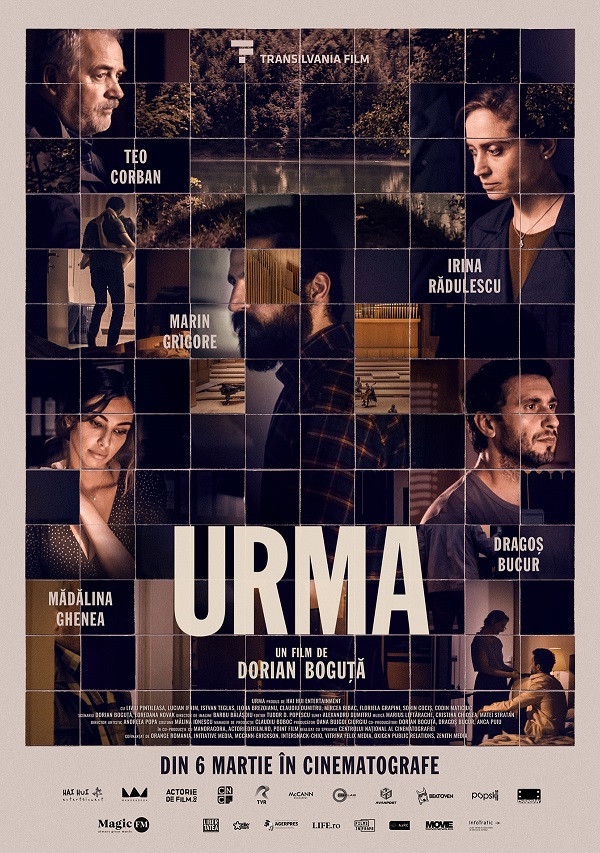 The film Urma, directed by Dorian Boguță, enters the Romanian cinemas on March 6 and brings a new name to the big screen: Irina Rădulescu, the daughter of the late actor Dem Rădulescu.

A talented theater actress, Irina (33 years old) is in the first role in a Romanian film. She childhood among the artists, her mother being the actress Adriana Șchiopu, she debuted in the theater at the age of 7, she appeared in television shows with her father, and from 2008 she can be seen on the stage of the Little Theater in Bucharest.

Irina Rădulescu is Ana, the central female character from Urma, a policeman with thriller accents about the secrets hidden behind us. When a famous pianist disappears, a policeman begins his search and gradually learns about his bizarre relationships and the decisions that triggered a whirlwind of surprising events. After the death of their parents, he had become obsessed with the happiness of his sister, Ana, beyond the confines of brotherly love. Also in the distribution, Teodor Corban, Marin Grigore, Dragoș Bucur, Mădălina Ghenea, Lucian Ifrim, Liviu Pintileasa, István Téglás.

The film will have a preview in the presence of the team, in Iași on March 2, from 8:00 pm, at Cinema Ateneu (str. Ion Creangă, no. 14). The tickets have already been put on sale and can be purchased online or at the ATM., at the price of 15 lei. tickets: bit.ly/BileteUrmaIS

“Following was the first experience in cinema and it meant an initiation, an adventure and, finally, a find. The occasions were still in the cinema, but they did not materialize and, anyway, not because of the importance of the role of Urma ”, says Irina Radulescu. The actress was 13 years old when the beloved comedy actor Dem Rădulescu ceased her life in September 2000, at 69 years old.

“The most important and essential lesson learned from my father is a simple one – because in the small bottles are the strong essences – I always look for simplicity and truth”Added the actress.

“I chose Irina as Ana because in the repeated castings with her, at one point, I saw my character and not Irina. And that’s all an director can want from an actor. And there is something else: even if it is a debut in the feature film, it showed a professionalism which, in combination with the freshness of a beginner, gives excellent results”, Says director Dorian Boguță, who also made his debut in the feature film, awarded at TIFF in 2018 for the short film Sunday.

Irina Rădulescu was born on October 14, 1986 and is an actress at the Little Theater in Bucharest. She played in the theater, among great actors, and Gina Patrichi was born with a baptism. The first appearance on stage was at the age of 7, in the role of Astinax from the End of Troy, by Walter Jens, directed by Vlad Mugur (1994). Since 2008, she has played on the stage of the Little Theater, the roles she appeared in (Miranda (in The Storm, by William Shakespeare, directed by Cătălina Buzoianu, 2008), Hermia (in the dream of a summer night, after William Shakespeare, directed by Gelu Colceag, 2011) , Celia (in Volpone, after Ben Jonson, directed by Vlad Cristache, 2013), Nina (in… ESCU, by Tudor Muşatescu, directed and the stage version Doru Ana, 2018), Camille l’Espanaye (in Nevermore, after Edgar Allan Poe, directed by Dragoș Galgoțiu, 2019).

Urma had the world premiere at the Namur International Film Festival and was selected in the Spectrum competition at Cottbus. The script is signed by Dorian Boguță and Loredana Novak, the image was made by Barbu Bălășoiu (Sieranevada), and the editing belongs to Tudor Popescu. The track is produced by Hai Hui Entertainment, in co-production with Mandragora, Actoriedefilm and Point Film.

The film’s team Urma made a video for one of the most popular tracks of the alternative rock band Urma: A Place for Me, from the 2007 album Trend Off.

Dem Rădulescu’s daughter debuts in the cinema with the role of Urma. Special projection in Iasi. | IasiFun