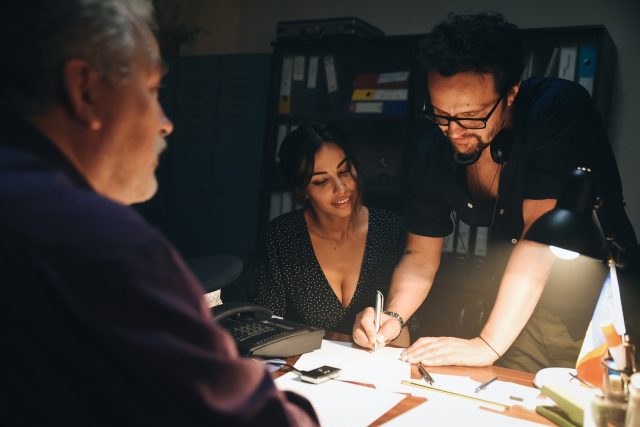 Mădălina Ghenea, an actress and model with an international career, will meet with the spectators from Iași at the premiere of the film Urma on Monday, March 2, at 20.00, at Cinema Ateneu.

At the special screening of the film directed by Dorian Boguță, two well-known actors from Iași will take part: Teodor Corban and Liviu Pintileasa.

The film enters cinemas in Romania from March 6 and can be seen at Cinema Ateneu. Following is a policeman with thriller accents about the secrets that those around us are hiding. When a famous pianist disappears, a policeman starts his search and gradually learns about his bizarre relationships and the decisions that triggered a whirlwind of surprising events. After the death of their parents, he had become obsessed with the happiness of his sister, Ana, beyond the confines of brotherly love.

It is the first Romanian film starring Mădălina Ghenea, noted by the international press in productions such as Youth, by Paolo Sorrentino, The Mongrel (r. Alessandro Gassman, 2012) and Dom Hemingway (r. Richard Shepard, 2013). In the Urma, the star plays a central role, the love of the missing and a key character in the police investigation. Alongside her, Irina Rădulescu, the daughter of the late actor Dem Rădulescu, also makes her debut in the cinema.

Teodor Corban plays the lead role in the film, that of the policeman who receives the case and initiates the investigation together with his colleague, played by Liviu Pintileasa. Also appearing in the distribution are Marin Grigore, Dragoș Bucur, Lucian Ifrim, István Téglás. A very appreciated actor of the “Vasile Alecsandri” National Theater in Iași,

Teodor Corban has had roles in some of the most award-winning productions of the New Val directors, and has recently been the star of the TV series Mangalița. With the director Dorian Boguță, now in the feature film debut, he has previously collaborated on the short film From today before (2012), a role which brought him the Interpretation Award of the Romanian Film Union.

Liviu Pintileasa studied theater at “George Enescu” University of Arts in Iaşi, in the class of teachers Cornelia Gheorghiu and Emil Coșeru, and is one of the most appreciated young theater and film actors of the new generation.

Tickets for the event are available here: https://bit.ly/32ulzi2

Published: February 27, 2020 Category: News Tags: follow, madalina ghenea, movie projection, teodor corban
Previous: Mădălina Ghenea will meet with the spectators from Iași at the premiere of the film Urma
Next: Actress and model Mădălina Ghenea comes to …
Loading Comments...
%d bloggers like this: