Raffaella Fico, Madalina Ghenea is Malena the Pugliese they took the defense of the champion of football international Cristiano Ronaldo on the Kathryn Mayorga scandal.

The Cristiano Ronaldo case does not deflate, but gets bigger. Kathryn Mayorga confessed to the German weekly Der Spiegel that she suffered violence from Portuguese champion Cristiano Ronaldo on 13 June 2009 in a bathroom at the Palms Hotel. Now he wants justice and told all that happened on June 13th and also immediately after the alleged rape of the German weekly Der Spiegel, convinced by his new lawyers and inspired by the #Metoo movement. He filed a lawsuit, claiming he was paid 375 thousand dollars by then soccer player of the Juventus to silence the whole affair.

In recent days the lawyer of Juventus champion Cristiano Ronaldo, Christian Schertz, attacked Der Spiegel for a clearly illegal report, denouncing the inadmissible intrusion into privacy of the Portuguese national football player. The star of world football CR7 has denied theaccusation of rape several times on social media. The Las Vegas police reopened the case. Local police spokeswoman, Aden Ocampo Gomez, explained that with an ongoing investigation no further details will be provided in the immediate future. The British tabloid The Sun published the video showing the night at the disco spent by the star of international football with the girl at the Rain disco before the alleged rape.

The former girlfriend by Cristiano Ronaldo, Raffaella Fico, took the defense of the champion of Juventus both on TV and radio. Yesterday a Sunday Live of Barbara D’Urso he reiterated: "From my personal point of view the story is not credible. Ronaldo he is a simple person and he is a gentleman, at least he was with me. I am perfectly aware that rape is something devastating for a woman. But precisely because of this, why did this girl wait ten years to report him? (Kathryn had filed a complaint for the alleged rape, but had not named Ronaldo as a potential author) ".

The former partner of Cristiano Ronaldo then added: "For me he is a good boy, but I stress that I am not a lawyer and I express this opinion without direct interest. Remembering violence after ten years is even worse, because it means reliving with pain and drama. Because it is true that violence brings it with you for life. Certainly it is particular that the complaints arrive after ten years, it can revive that suffering ".

Madalina and Malena comment on the Kathryn Mayorga scandal

The former co-host of the Sanremo Festival Madalina Ghenea got to know CR7 very closely and told an interview granted to Vanity Fair: “It seems incredible to me. I shot the commercial for a perfume with him and he seemed to me to be a healthy man, dedicated to the family, he even helped me to raise funds for my association. I respect him a lot. If he tried it? Nah. He arrived on the set, we shot four hours, and he left. A gentleman ".

The red-light actress and former shipwrecked VIP of the famous island is much more direct and hairless Malena Pugliese, who on Rai Radio2's microphones during the transmission I Lunatici asserted: "I'm sorry that very often we try to discredit the image of a person talking about his sexual tastes. These women are there and then after years they magically remember being raped. It's not that someone forces you to go to the bedroom. Then in this case there was the whole question side a, side b, this episode seems really strange to me ”.

Malena then went on to say: "And then these women make me think they remember to report abuse after so many years. Maybe just when the character they accuse is in its moment of maximum splendor. I'm with Ronaldo. But I recommend it. Next time, ask a b side professional. I am sorry for those women who really suffer the violence, maybe at home or at work. Not those who perhaps repent after years of lightness ". 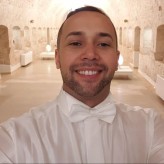 r The calendar of the most recent films released in theaters sorted by release period. For each film you will find the card with accurate information on cast, production, audio and video material to satisfy your curiosity.

Godzilla: King of the Monsters

R n
The Angel of Crime Luca Marinelli debuts in Hollywood with Charlize Theron. And Netflix

The talented Italian actor joined the cast of the action thriller The Old Guard, along with the Belgian Matthias Schoenaerts. Robert Pattinson will be Batman, official!

After the rumors that have been chased over the last few days, official confirmation comes from Warner Bros.

Published: October 15, 2018 Category: News
Previous: Madalina Ghenea and love: "I fall in love with strength" "/ On Cristiano Ronaldo:" a true gentleman "
Next: Madalina Ghenea: «Respect for Ronaldo»
%d bloggers like this: