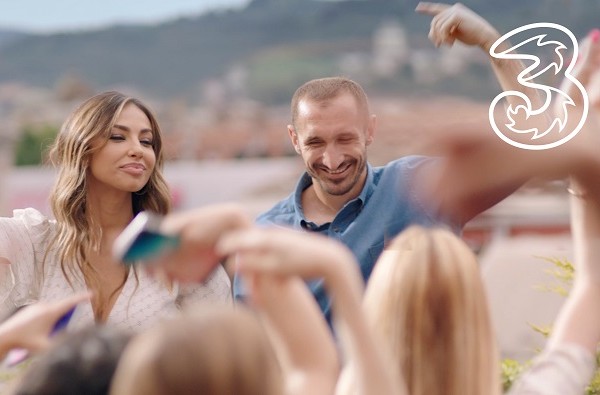 It is on air on television brand new summer spot 3 with the two testimonials as protagonists Giorgio Chiellini is Madalina Ghenea.

The advertising campaign carries the signature of English Wham and Italian The Big Now, the agency of Dentsu Aegis Network which therefore starts the collaboration with the telephone operator as a creative partner on the front of the line. The media is instead followed by Dentsu Aegis Network.

The spot launches a new offer and, at the same time, emphasizes the idea of ​​relaxation and light-heartedness typical of the summer season. The focus of the communication is therefore "Pay after the summer”, The promotion that allows customers 3 to have immediately Samsung Galaxy S10 and to pay the first installment only after the summer, plus a saving of 300 euros.

There The world premiere of the spot's music is the new single by Fabio Rovazzi, brand ambassador of Wind that in this way approaches, for the first time, the communication between the two brands.

The spot is programmed, in the 30 second format, on major national TV networks and is available on the 3 Italia Youtube channel.

Published: June 26, 2019 Category: News
Previous: on TV a new spot with Giorgio Chiellini and Madalina Ghenea
Next: PRESS RELEASE: The notes of Master Nicola …
%d bloggers like this: