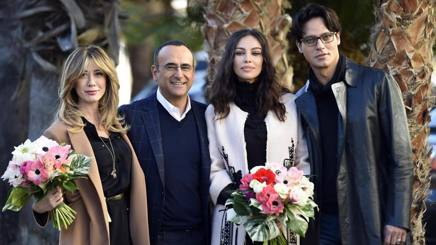 Virginia Raffaele, Carlo Conti, Madalina Ghenea and Gabriel Garko: they will be the ones to conduct the Sanremo Festival. Handle

Virginia Raffaele, Madalina Ghenea and Gabriel Garko: this is the cast that will join Carlo Conti at the next Sanremo Festival (9-13 February). It was officialized by Carlo Conti, at a press conference, who spoke of "co-hosts". Laura Pausini, Eros Ramazzotti, Pooh and Renato Zero will be guests of the Sanremo festival. No international guest name came out of the conference, but I'm in talks with music and film personalities. "This is my second year of the three planned, in fact the next one will be – explained Carlo Conti -. Last year we defined it as the` macedonia, but this year the festival will be `mosaic, because it is made up of many artists very different from each other, who are the real protagonists of the Festival ".

tribute –
The press conference presenting the 66th Sanrenmo Festival from the Teatro del Casin of the coastal town opens with a tribute to David Bowie. it was the director of Rai1, Giancarlo Leone, who underlined that in agreement with Carlo Conti, artistic director and host of the next Festival, it was "right" to open with this tribute, with images that date back to 1997, when Bowie was a guest of the Festival.

hot –
The Romanian actress and model Madalina Ghenea and the actor Gabriel Garko, idol of the very young but not only, will work alongside Carlo Conti on the stage of the Ariston Theater. They are joined by Virginia Raffaele. "The call of Carlo Conti was a surprise for me, perhaps because I used to underestimate myself". Gabriel Garko, one of the three co-hosts called by Conti, comments on the new adventure. "I'm usually protected by a character, I'm shy even if you wouldn't say it, because I always undress … This will be the first time on a stage and I decided to be really myself, to be like when I'm at home – has the actor explained – he will enter Italian homes in another way than usual: normally I am the protagonist, here he will be at the service of the show ".

"I'm very excited, I don't know how to thank Carlo Conti, Rai and Italy, because I arrived here at 14 and this country gave me a job. My dreams came true here". Madalina Ghenea said this. "As a child, I used to look at Sanremo together with my family – says the actress -. When I met Carlo the first time I only greeted him, I was too excited. This magical place and will be a wonderful experience, I hope to bring a lot of Felicit, who is also my favorite piece of Sanremo and a memory of my childhood ".